All my books will be discounted either 25% or 50% for the entire month, beginning at one minute past midnight Pacific time on July 1.  Catch them while you can!

Go to Smashwords.com — specifically my profile page – to find all my books. The discounts will be applied automatically when you add the book to your cart.

Shopping at Smashwords.com has the advantage of allowing you to select whatever e-format you use, and you can always find a link to it on my site, as well as links to other retailers carrying my books.

Okay, folks, here it is!

From the back cover:

It’s no big deal for Dorsey Wegman to agree to fetch one of Mackenzie Wilder’s new boats. She takes on lots of small jobs for her friends, especially if they can pay well like the Doc. But this one has gone loopy. The boat that was supposed to be ready for the water, isn’t. The boatwright that was supposed to work on the boat is missing. And … “…Doc? There’s a dead woman on board your boat. The police have impounded it, and I can’t leave until they have a handle on what’s going on. They’ll be calling you in about a half hour, they said. Doc, what should I do?” Mackenzie hotfoots it to New York’s North Country and finds herself and Dorsey required to stay and help investigate. Mackenzie’s professionalism soon outweighs the aggravation to local law enforcement as they work together to learn who would bother to kill the lady minister of a tiny church on one of the Thousand Islands. In fact, her skills and attitude reap an instant mutual attraction with sharp, charismatic CGIS Agent Aidan Ghee. And now Mackenzie has three problems. Who killed the woman aboard her boat? What does the Governor asking her to stay and figure this out have to do with the subsequent bodies that turn up – or with Lt. Bryan Jamison’s sudden lack of communication? And is she ready to commit herself for life to Bryan ?

It’s a question writers often get, and many don’t know how to answer. Reasonably so, because sometimes we aren’t so much inspired as driven towards writing about particular subjects.

In  this case, however, my inspiration is simple. I’ve always loved the mystery genre, but it wasn’t until I discovered antique boats through my husband and his family that I knew what kind of world I wanted to place my mysteries in (at least some of them.) The boats are beautiful, with deep histories that are sometimes violent. The wood gleams to draw the eye, and they look so natural upon the water.

Book #3 in the Mackenzie Wilder/Classic Boat romantic mystery series has further inspiration in the boat owned by a friend my mother-in-law made at the Annual Antique Boat Show held at Clayton, New York  , now into its 50th-plus year itself. Walter Predmore, Jr. and his wife Aggie made friends with Nea, who was the village librarian and liked to walk the docks with her dog. That long-lived friendship resulted in our getting to know Walt and Aggie as well, and provided us with standing invitations to ride aboard their boat, the Roscommon, whenever we were in Clayton at the same time as them. Today, some 40 years or so later, Walt still owns the Roscommon. He  told me recently that last year, with its extra rain, was the first time in nearly the whole time he’s owned it that the boat didn’t make it into the water. Wooden boats need a lot of attention, and his wonderful Chris Craft cruiser refuses to permanently recover from some of the wood problems it had even when Walt bought her.

Here is the Roscommon, captured by a local paper as it sails in the boat parade as part of the Annual Antique Boat Show years ago. It’s possible to see my husband in the back of the boat (barely), as the photo was actually from a couple years before it appeared.

And here is a trial image that may (or may not) be used as the cover image for the upcoming  book #3, FLYING PURPLE PEOPLE SEATER. Walt was kind enough to grant us permission to work with an old photo of the boat to create the cover. 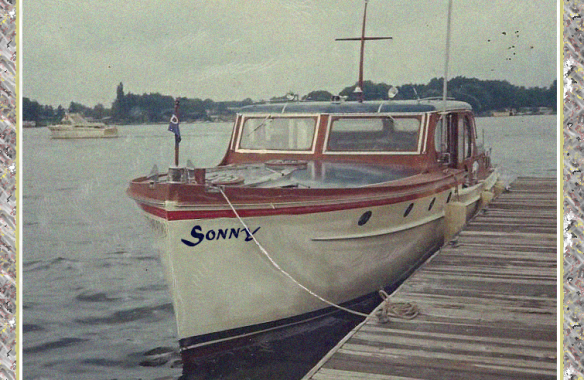 The Sonny is the boat Dorsey Wegman sets off to retrieve from Bateauville for her friend and physician, Mackenzie Wilder. But Dorsey phones Mackenzie, and soon they are involved  in trying to track down who was where when, and who might have murdered whom. Against the backdrop of the St. Lawrence River and the Thousand Islands between Canada and upstate New York, drama both personal and historical plays out, changing the courses of many lives in the process.

I’ll post an excerpt from each of the Mackenzie Wilder books soon, including from this book, even preceding publication.

If you have an antique or vintage boat, let me know,  maybe share a photo. We’re always looking for cover possibilities, and we love any excuse to look at wooden boats.

Many thanks to Walt for the rides on the Roscommon, and for allowing us to use her as our model as well.