… a brief monologue on the ways that can backfire on you

Besides being a means of offering my excuses for missing deadline once again, this short list enumerates various ways promising something can get you into trouble.

That’s a saying that was taught to me by my screenwriting son. It refers to economy and purpose in writing.  When you put an object or person into a scene, there’s a reason they are there. There has to be, particularly in any short writing, but even in novels.

Even 600-page novels have a finite number of ideas to convey, in a finite number of words. If you can’t deliver follow-up why something is on the page, if its being there doesn’t serve a purpose later on, don’t promise the reader that it does. Take it out.

Now I’ll go finish my book. No, that was not a promise, but I will.

Alas, as you will see from my new message on the sidebar  — launch date has been pushed slightly back AGAIN. My wonderful alert editor found an absolute morass of confusion in my current revision of FLYING PURPLE PEOPLE SEATER. I’m in hot pursuit of the problem, but it will take longer than a mere 5 days to fix completely. After all, it has to be done right, right? 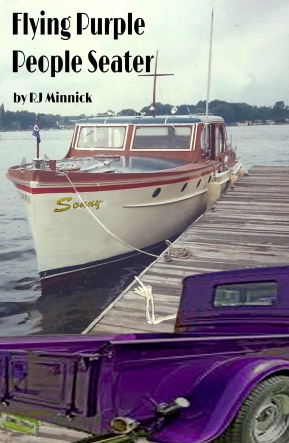 So, a new launch date of the 29th of April, and soon you can see what happens in the Flying Purple People Seater.

Oh! and for all the putting-up-with-me you’ve done, here’s a sneak peek at the cover:

Spent about six hours of Saturday at our group’s write-in. We had use of an event room with its adjoining kitchen at our library. Some pot luck, a little set-up, and we had ourselves a friendly quiet location dedicated to fostering an atmosphere conducive to writing.

We had people working on designing covers for their self-published books. It’s a two-edged sword when you publish yourself. You’re in charge of everything, but that means you’re responsible for everything.

Someone was outlining a story for our group anthology. Another was working on a script. One was reviewing and revising her long-suffering book outline. Long-suffering only because even she thought she’d been working too long on it, and because the work itself has been intense. We had short stories and verse going on as well, and everyone seemed to make progress, even the writer who had to leave after coming in solely to pick up information.

It’s great to stop and devote a large chunk of time to writing. I’m lucky enough to be able to do it more regularly than some of my full-time working writer friends. Even so, a special day allowed for special focus. I  hope we follow through on our idea of doing this every couple months.